Rachel Hayes - A Decade of Dedication 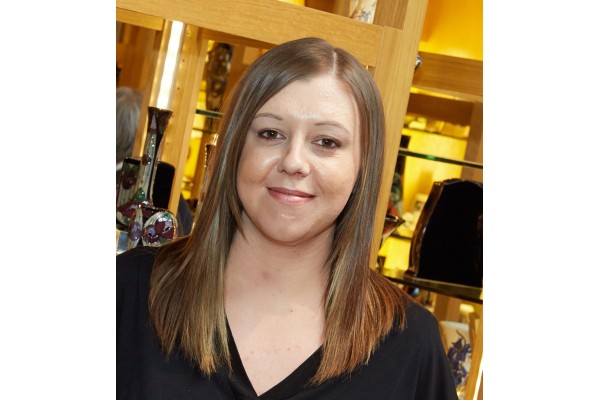 An article by Managing Director and Director of Art, Elise Adams.

10 years ago, on the 16th of July 2010, the Moorcroft Club acquired a new Club Administrator, in the form of Rachel Hayes. Since 1997 I had run the Club and with my increased director’s responsibilities within Moorcroft, it was time for the handing of the Club baton to a new member of staff. I must admit I found ‘letting go’, as some described it, difficult, but I need not have worried as the arrival of Rachel was a godsend.

A decade on, and Rachel is very well known to many of you, both here in the UK and overseas. She is a font of knowledge, whom club members can rely upon, to help them whenever they have any Club queries.  It could be said, that Administration is Rachel’s middle name, as she is highly organised and efficient. If she is honest, she dreads anyone offering to “help” her, as this usually means disrupting her incredibly organised system, much to her chagrin.

For many Club members, Rachel has been a vital lifeline since the Moorcroft factory closed on the 23rd of March. Like myself and a handful of other key staff, throughout lockdown Rachel has been busy working from home, answering Club emails and speaking to members, who prefer to purchase pieces over the phone rather than online.

And so arriving at this milestone anniversary, we thank Rachel for her 10 years of service to the Moorcroft club and its members, and what better way to do so than with a special exclusive Club design or two. 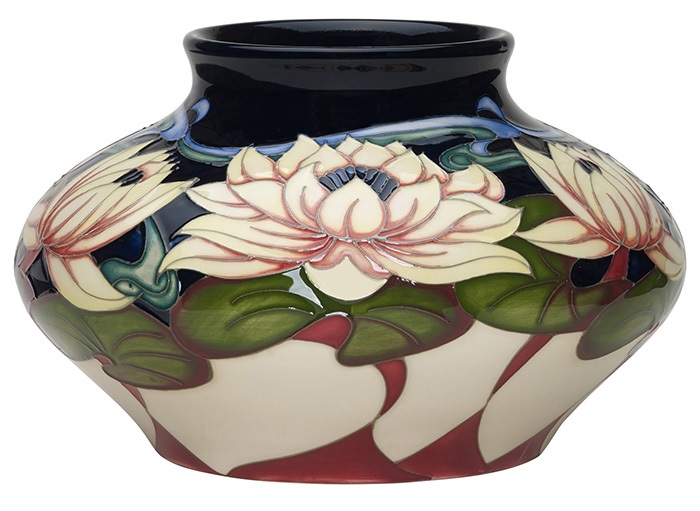 To celebrate Rachel’s arrival in July ten years ago it seems only fitting that a flower found to be in full bloom during this month, should be chosen as a commemorative piece. The waterlily it is known to symbolise the month of July and reminds us of the simple joys of summer. Now more than ever, such joys are to be cherished during the difficult times in which we currently find ourselves. Sitting peacefully on natural green pads, waterlilies open their petals slowly and gracefully, embracing the outdoors with a Regal poise. The slow unfurling of their flowers offers a time for reflection, as too do the images that are mirrored in the still water beneath them.  Our Club Administrator has been in a reflective mood of late during lockdown and so choosing senior designer, Rachel Bishop’s Jewel of July seemed the perfect choice. 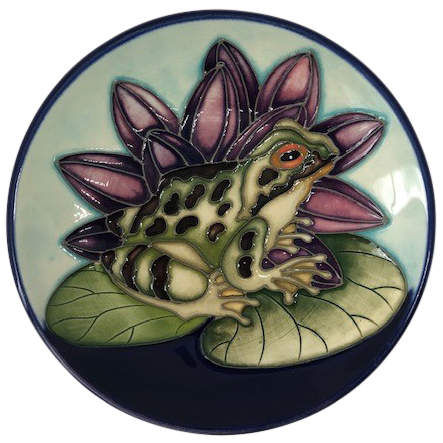 During her time at Moorcroft, Rachel has overseen the arrival of 10 exclusive club members renewal designs, the first being Lords of Leith Downs. Some years these have been small miniature vases, and other years a classic Moorcroft coaster.  Knowing that for many Club Members, collecting and displaying smaller pieces in their homes is always a popular choice, a second exclusive Club design comes in the form of Packmoor Pond. Here a solitary July waterlily blooms in shades of pink and purple, while boldly sitting in front of it on the lily pad is a frog ready to make a splash into Packmoor Pond at a moment’s notice. When Rachel first started working at Moorcroft, she would wait by this pond every morning for her bus to arrive, (I am still trying to persuade Rachel to have driving lessons 10 years on!) enjoying watching the wildlife as she waited. She even recalls her mum running to catch her before she climbed on the bus one morning, slipping and losing her footing, and falling into the pond itself!  And so designer Kerry Goodwin’s Packmoor Pond brings a smile to Rachel’s face every time she sees it, and she hopes it will for you too.

Jewel of July is a limited edition of only 20 vases and Packmoor Pond is an open edition, with both designs being exclusive Club designs.  Your Club members’ discount is of course available on both pieces.

I am sure many of you will join with me in saying a huge thank you to Rachel, our very own jewel of July, who works so tirelessly for Club members around the world. We hope she enjoys her next decade with Moorcroft, as much as she did the first. I am so glad that I embraced ‘letting go’ a decade ago!