Moorcroft and The Royal Society for the Protection of Birds

Since 2010, Moorcroft have collaborated with The Royal Society for the Protection of Birds (the RSPB), the UK's biggest nature conservation charity, to create some of the finest pieces of Moorcroft art pottery you will ever find. The RSPB’s nature reserves provide homes to around 16,000 species, some of which are brought back from the brink of extinction. As an Arts and Craft pottery that seeks to harness the mysteries and the beauty of the natural world, Moorcroft historically holds designs featuring multiple species, and rich in biodiversity, making the partnership with the RSPB one of mutual affection.

Moorcroft designers owe a great deal to nature and this was evident in a very special collection marking the landmark 125th anniversary of the formation of the RSPB. Designer Kerry Goodwin created a six-piece limited edition collection, A Homage To British Wildlife. The collection, which was a global success, marked a high point in Kerry’s design career, now renowned for her RSPB designs.

With designers accessing RSPB imagery and, creating many designs in situ at RSPB nature reserves, Moorcroft have not only celebrated native species through ceramic art but have also raised much-needed funds and highlighted current issues. 2019 witnessed a collection launch that highlighted the plight and wonder of the British woodland – one of our richest habitats for thousands of living species including some of our most-loved animals and plants. Hedgerows, copses, woods, wood pasture and parkland all have a unique characters, biodiversity and ecosystems. Together they make up vital habitat links, connecting wildlife across the landscape and helping species to survive and thrive.

2020 was a challenging year for many, with unexpected events taking place beyond our control. Nevertheless, something that did not change was the spectacular phenomena of millions of birds taking to the skies to migrate between their summer and wintering grounds. How we all appreciated the natural world as a panacea for our worries.

Working tirelessly to save many species from extinction, Moorcroft were delighted to celebrate a number of the RSPB’s success stories in 2020 as the charity continued its vision to give nature a home. RSPB reserves only cover 0.6% of the UK’s land surface but they support more than 10% of the UK’s breeding population of 32 bird species and a selection of these are highlighted in this new collection of designs, together with other threatened species.

On Friday 6th and Saturday 7th August 2021, Moorcroft hosted an event at the RSPB nature reserve Leighton Moss in Lancashire. Managing Director Elise Adams unveiled our 2021 RSPB collection, inspired by the birds, insects and plants found in abundance at this unique wetland reserve. Bearded tits, bitterns, oystercatchers and wigeons will be amongst the new ornithological design offerings, with common darter dragonflies and orange tip butterflies bringing the insect world to life. Designers Emma Bossons FRSA and Kerry Goodwin were both on hand demonstrating how a piece of Moorcroft is created, from the initial design idea right through to the finished piece.

In 2022 RSPB Minsmere celebrates its 75th Anniversary.  RSPB Minsmere certainly lives up to its reputation for being the crown jewel of the RSPB’s reserves. Located on the Suffolk coast, it is one of the richest wildlife sites in Eastern England, home to rare birds, mammals, butterflies, plants and other creatures great and small. 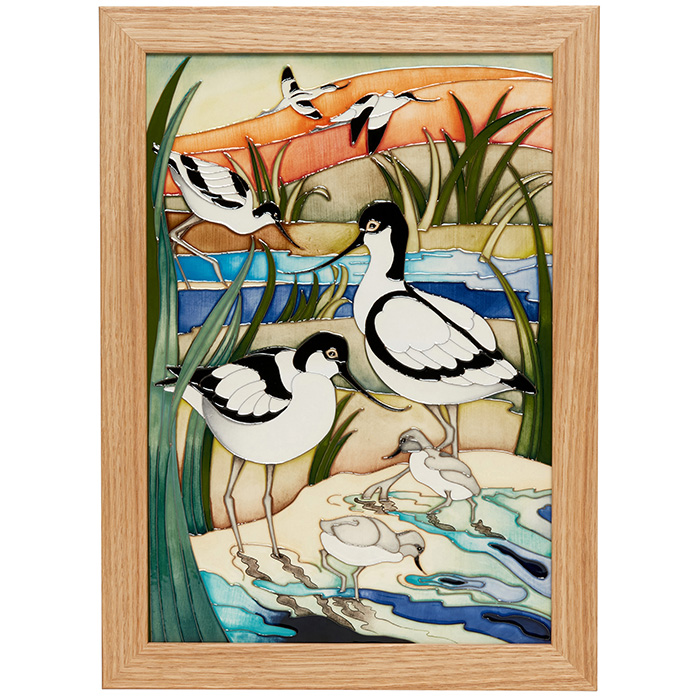 The reserve consists of marshes, reedbed and open water; it has mature woodland and damp scrubby areas as well the heathland and, of course, the coast which borders the reserve, famed for heralding the return of the avocet to our shores after more than a century.

For 75 years, visitors have heard bitterns booming or the piercing shrill 'eeyah' of the marsh harriers and seen the avocets from one of the many hides on the reserve. Moorcroft celebrates this landmark year with The RSPB Minsmere 75th Anniversary Collection.

As an Arts and Craft pottery that seeks to harness the mysteries and the beauty of the natural world we were delighted that in 2022, RSPB Bempton Cliffs, on the spectacular Yorkshire coast near Brighton, home to one of the UK's top wildlife spectacles, has inspired one of Moorcroft’s best ever collections. On Friday 23rd September Moorcroft launched its new RSPB Bempton Cliffs Seafarers Collection at the reserve. Never before, has a Moorcroft Collection captured the awesome spectacle of an ocean facing reserve with such a blast of colour and movement straddling the heights and depths of the beautiful reserve with such colour, vibrancy and movement. 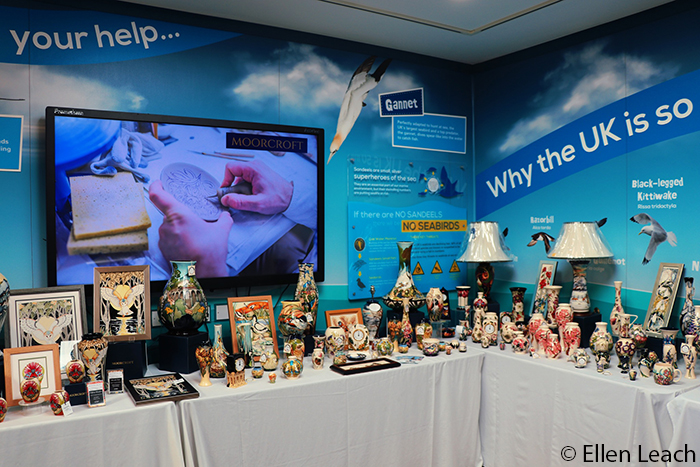 The Bempton Cliffs Seafarers Collection takes a bird’s-eye view of this nature reserve. It observes the cliff residents of puffins, gannets and guillemots, barn owls and even a six-spot burnet moth, to create a revelation of natural beauty hidden in the heights, and the myriad marine colours from the deep.

As we launched the new RSPB Collection, Moorcroft was deeply saddened to hear that tens of thousands of seabirds have died, including gannets, Sandwich terns, and great skuas, in some of their key colonies from Avian Flu. You may also have seen the devastating impact of Avian Flu in your area or heard news reports.

Overall, 61 UK bird species have tested positive for Avian Flu. This continuing crisis could tip our globally important seabird populations - who already face many threats - towards disaster. Among other losses, we fear the virus has already wiped out nearly half of the UK’s rare roseate tern populations.

By ordering any of our RSPB designs, you will be helping to support the RSPB fundraising effort.

Donations can also be made now direct to the RSPB by clicking the DONATE button on their Avian Flue Emergancy Appeal page.

The Moorcroft Bempton Cliffs Collection is now very poignant - as we are reminded that the beautiful birds represented in some of the designs are now at risk. The precipitous coast at Bempton Cliffs hosts gannets, guillemots, kittiwakes, and puffins that nest on the ledges of the 400-feet high cliffs. They have survived on these precarious cliffs for generations, only to become vulnerable when such a colony is at risk. Around half a million seabirds gather here between March and October to raise a family on towering chalk cliffs which overlook the North Sea. Whilst puffins have now left Bempton cliffs for their annual migration, gannets and kittiwakes are now at risk. That said, we have been advised that Bempton Cliffs is, what is known as, a vertical Colony, and therefore the risk to humans is negligible.

In the meantime, you can learn more about the work of the RSPB at www.rspb.org.uk. 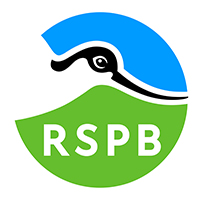