Focus on Design - Dusk to Dawn

On International Women’s Day this week, the RSPB celebrated icons of their charity. They were proud to say that they were founded by Emily Williamson, a woman who successfully campaigned against the use of feathers in fashion 130 years ago. In 1889, in a defiant protest of the cruel trade in feathers for lady's hats, Emily established The Plumage League with some simple rules:

At the same time another campaigner, Eliza Phillips, was running a group with similar aims from her home in Croydon, the Fur and Feather League, holding ‘Fur, Fin and Feather’ meetings. Coming from different backgrounds, Emily, 36, and Eliza, 69, were brought together by their shared interests in animal welfare and wildlife conservation and in 1891 the two groups joined forces to form the Society for the Protection of Birds. 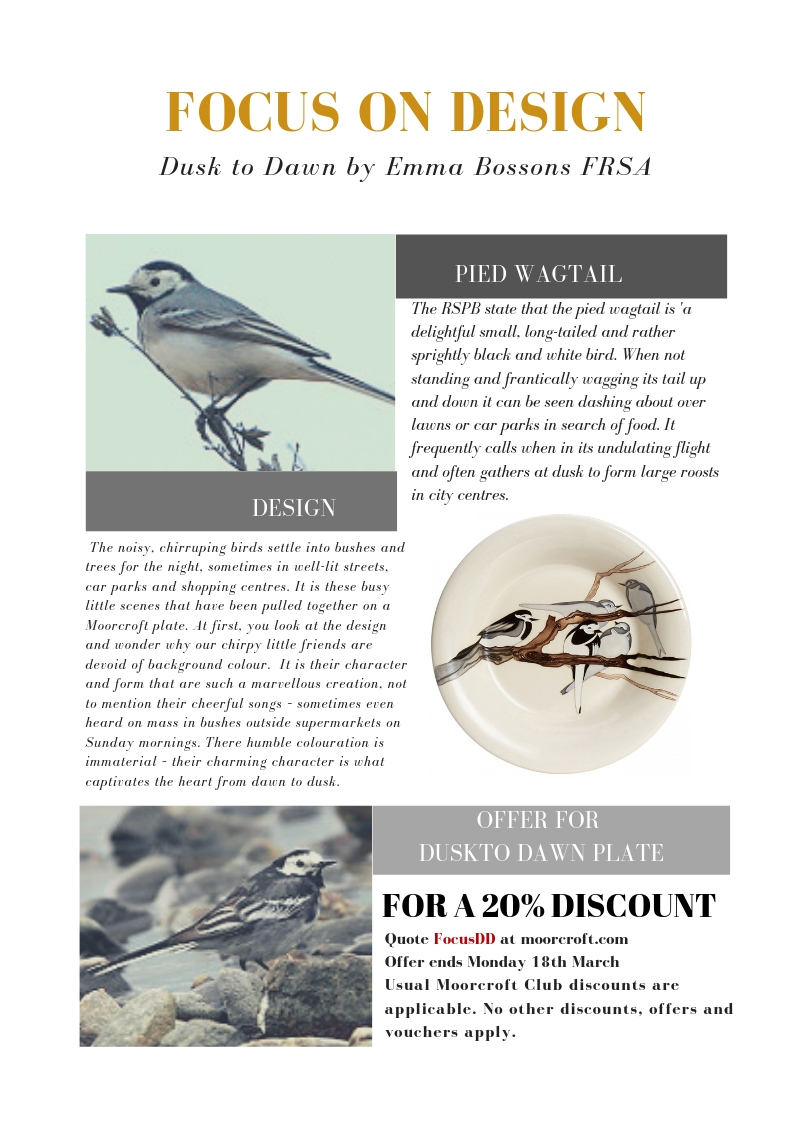 Today the RSPB are the largest conservation charity in the UK, protecting wildlife, habitat and continuing Emily's campaigns to speak up for wildlife and to Give Nature a Home. This year, to celebrate the launch of the RSPB the British Woodland Collection, Moorcroft are holding an event at Sherwood Forest – the RSPB’s newest Visitor Centre. Join us at this event https://www.moorcroft.com/rspbsherwood-2019 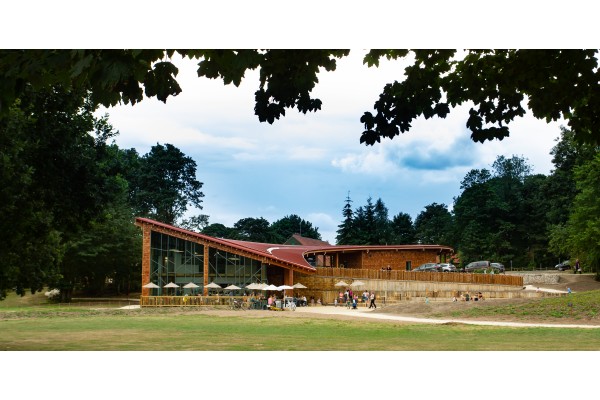 The RSPB Woodland Collection captures the great British woodland- woodland that creates some of the richest habitats for thousands of living species including some of our most loved animals and plants. Passionate about nature and dedicated to saving it, the Royal Society for the Protection of Birds is now the largest conservation charity in the country. Moorcroft has already worked closely with the charity for several years, to help it raise much-needed funds, highlight current issues and celebrate native species through ceramic art. Some of the birds we have endeavoured to raise awareness of through our art, include endangered species. 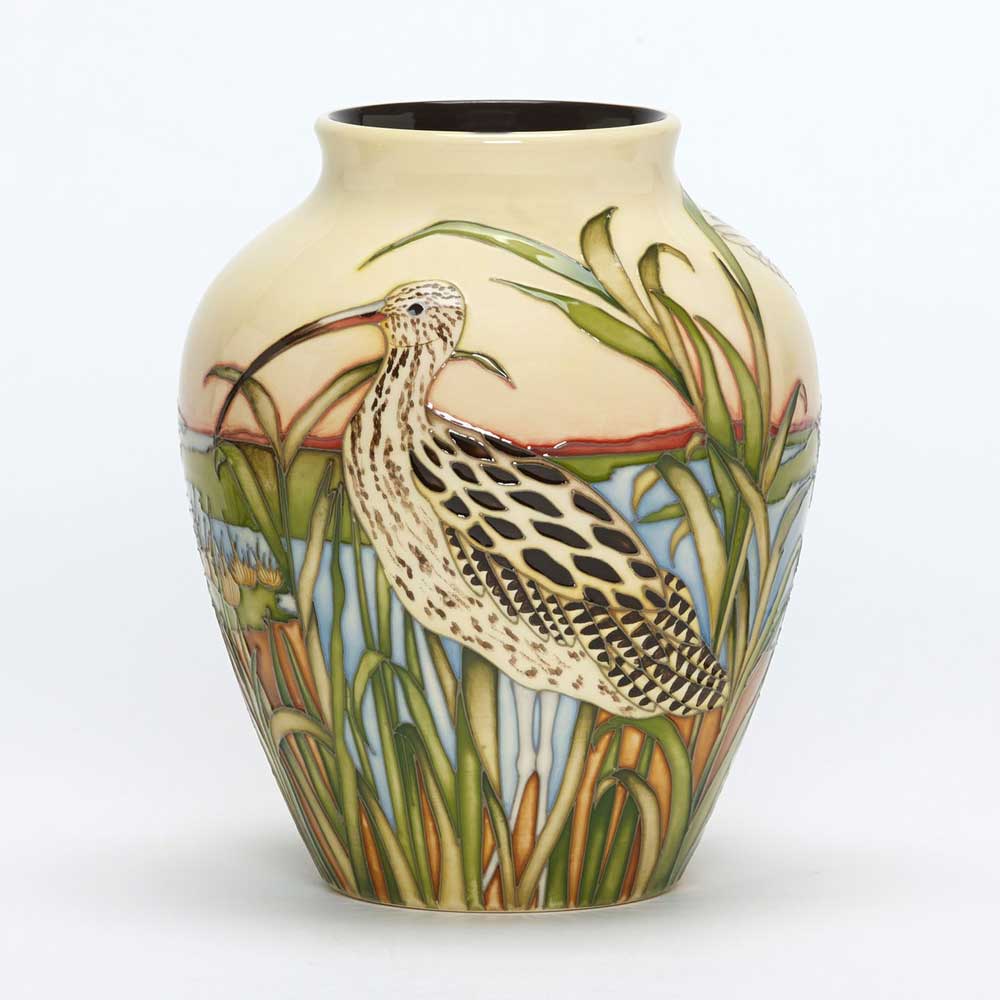 Whilst the colouration of some of our native birds are exquisite, from woodpeckers to blue tits, we must not forget that it is the life within that is also a wonder. Watch a starling murmuration or a woodpecker at work through binoculars and you are captivated. Fascinated by the rhythmical flicker of Pied Wagtails squabbling in her garden, Emma took up her sketch pad and created a simple study of these sprightly black and white birds. When not standing and frantically wagging its tail up and down, the Pied Wagtail can be seen dashing over lawns or pathways in search of food. It can be heard singing during its flight, and at dusk they will gather to form large roosts in city centres. ‘Once I started looking at Pied Wagtails, I found some really lovely images of them either nesting or perching in groups in city trees. From there, I was inspired to draw them huddling together in their family groups’ Emma explained. 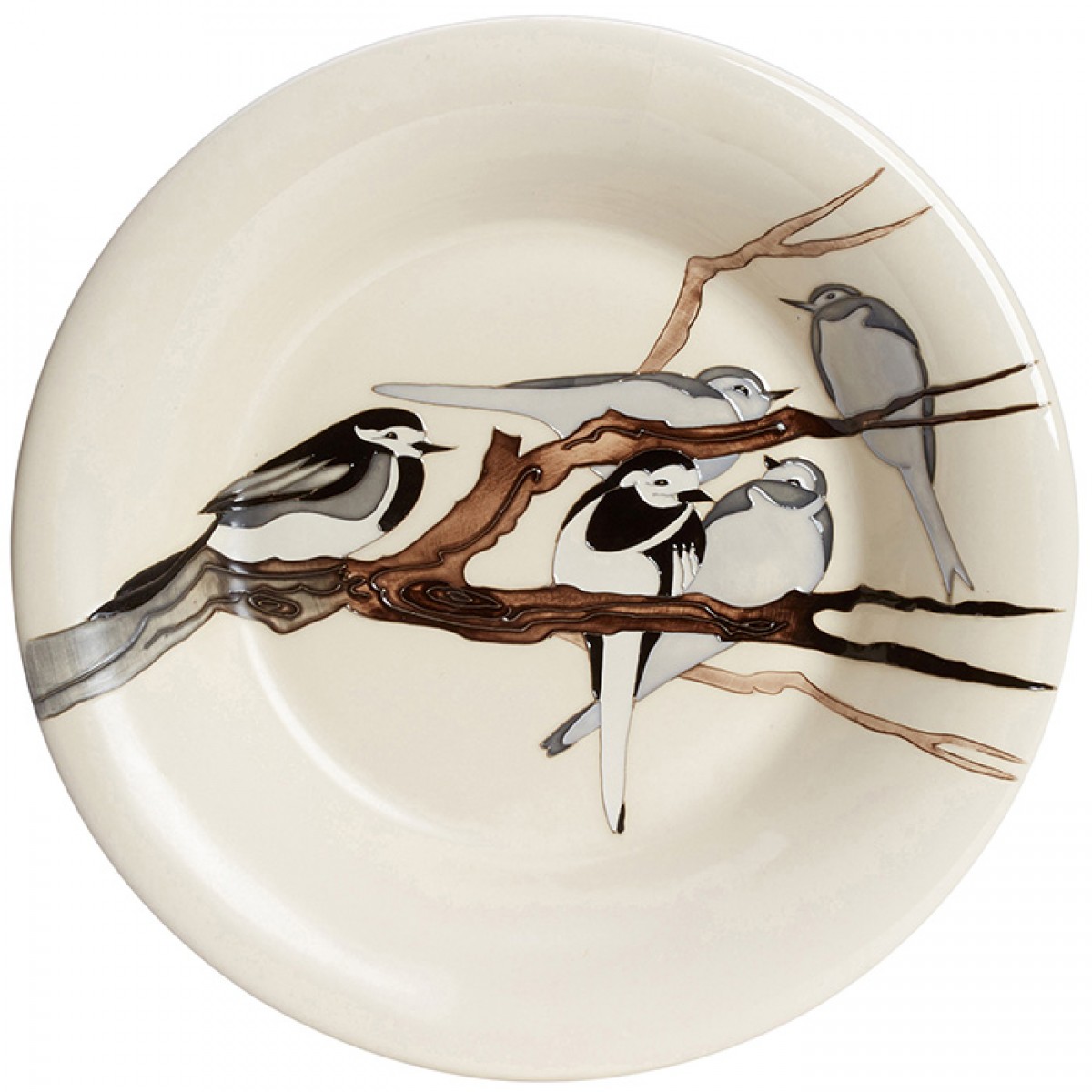 At this time of year, the Pied Wagtails ca be found just as Emma has depicted - roaming in small, restless flocks, leap-frogging over each other as they chase down low-flying insects, flushed into the air by the birds’ approach. At dusk, larger flocks can form, sometimes in their hundreds, as they seek safety in numbers. The noisy, chirruping birds settle into bushes and trees for the night, sometimes in well-lit streets, car parks and shopping centres. It is these busy little scenes that have been pulled together on a Moorcroft plate. At first, you look at the design and wonder why our chirpy little friends are devoid of background colour. These birds are just as much at home in cityscapes as the countryside, perhaps because it is warmer in the cities. They are everywhere if you choose to look and listen. It is their character and form that are such a marvellous creation, not to mention their cheerful songs – sometimes even heard on mass in bushes outside supermarkets on Sunday mornings. Their humble colouration is immaterial – it is, without doubt, their charming character that captivates the heart from dusk to dawn. In short, Emma’s design is simply perfect. Pied Wagtails are not noted as an endangered or ‘red list’ species, and their population is stable. They have learnt to adapt with man’s encroachment into the natural world and perhaps even benefit from the warmer city climate. Due to their plain plumage have never been hunted for their feathers for fashion or needed to be championed by the RSPB – nevertheless, they are a true gift to us all wherever we dwell.

This weekend Moorcroft are at Thaxted Guildhall in Essex, not only selling some of the pieces found in the 2019 catalogue and much more at tempting prices, but we are also celebrating the natural world in a Wildlife Exhibition. For more than forty years, Moorcroft has staged exhibitions at Thaxted’s 600-year old Guildhall.  Subject matter has varied considerably over time and for 2019, the art pottery, said to be the finest in the world, will be showing Wildlife in Art – an exhibition demonstrating how Moorcroft, the only surviving art pottery with roots deep in the Arts and Crafts movement, has seen wildlife design grow and mature from the late 1890’s to the present day.    New work still draws on its Arts and Crafts legacy, but the art pottery has moved well beyond the broad-petalled flowers, mushrooms and toadstools, fish, forests and trees – and not to forget the ‘Florian Style’ designs, which played a significant role in introducing the fledgling art pottery’s name back in 1897 when it all began. The simple truth is that Moorcroft is now in full flight with bird and wild animals captured in visions of colour from all over the world.  The old art pottery has come of age and its designs are timeless as well as good, proven investments for their owners.  Each piece is different because each piece is handmade from start to finish.  Homes are enriched by their presence and there can be few things in life today which are a real pleasure to see in any house that you may enter.