2018 marks the 150th anniversary of the birth of the architect whose buildings & DESIGN WORK have become hallmarks of Scotland's largest city, Glasgow. THIS WEEKEND WE VISIT 78 DERNGATE, the only house in England designed by Charles Rennie Mackintosh.  Join us there for a guided or unguided tour of the house, enjoy a talk by Rob Kendal (Chairman of 'Friends of 78 Derngate') and indulge in a light buffet lunch.

Plus see Moorcroft in a brand-new setting and be among the first to view our Mackintosh inspired collection.

Places for the talk, house tours and lunch are stricly limited. 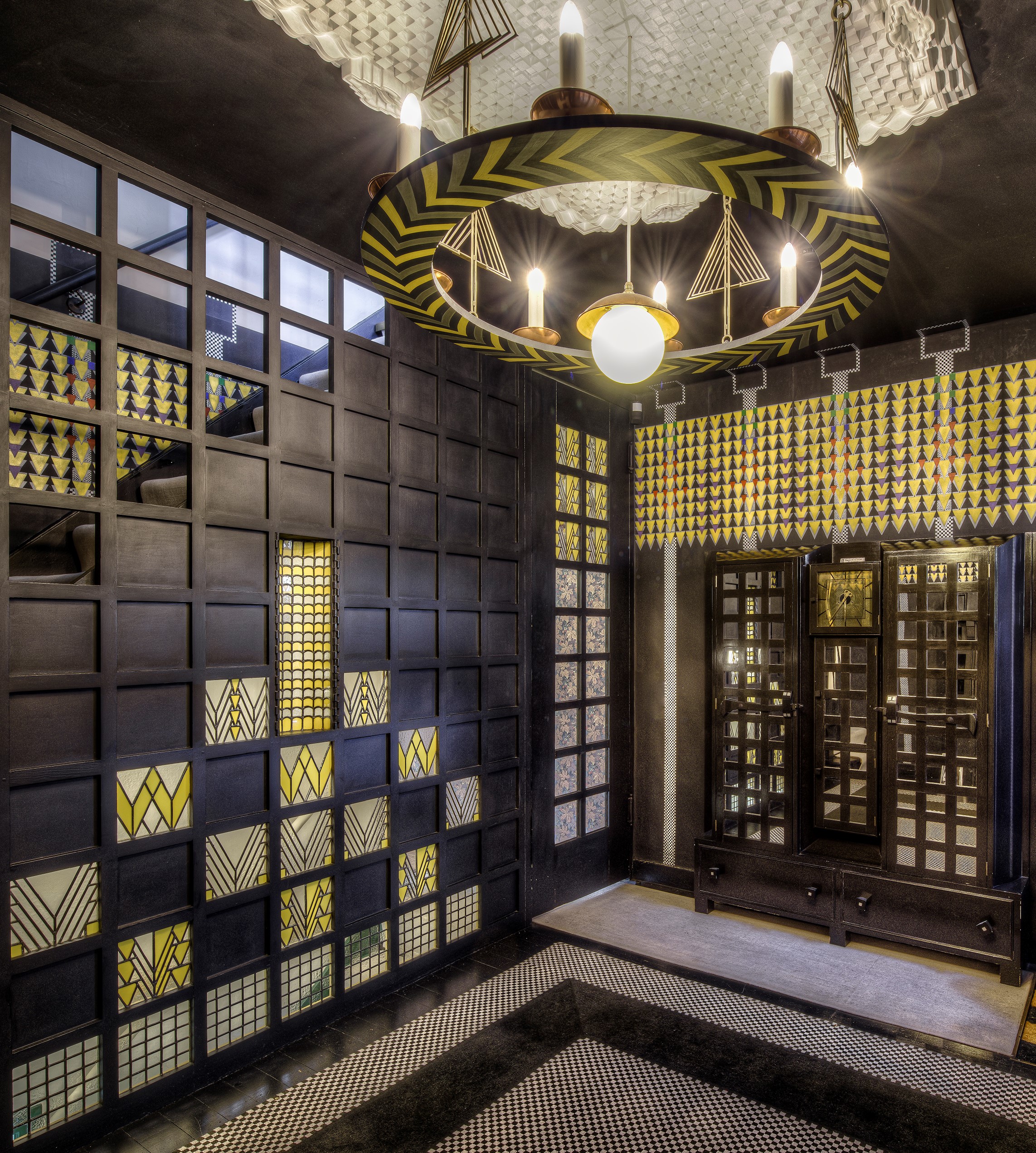 In March 1917 Wenman Joseph Bassett-Lowke and his bride Florence Jones moved in to 78 Derngate. Over the previous nine months the house had been transformed from a rather pokey and old-fashioned house into a modern and convenient home.  One of the most significant features was the addition of a rectangular extension at the rear, enlarging the kitchen and the dining room above, and forming an enclosed balcony for the master bedroom and an open one for the guest bedroom. The transformation had been achieved by Bassett-Lowke with the help of Northampton-based architect Alexander Ellis Anderson and Charles Rennie Mackintosh. There are still some areas of uncertainty as to who was responsible for what, although the over-all effect was created by Mackintosh.

The primary documentary evidence consists of plans submitted for building regulation in June 1916; a number of drawings and plans by Mackintosh; six letters from Bassett-Lowke to Mackintosh, 1916-1919; some notes which Bassett-Lowke wrote later in life and correspondence he had with Thomas Howarth, Mackintosh’s biographer in the late 1940s; numerous black and white photographs taken by Bassett-Lowke. There were also a number of contemporary articles published about the transformation. [Copies of all these documents, articles and photographs are in the 78 Derngate Archive]. From these sources, it would seem that in the late spring of 1916 Bassett-Lowke had his eye on this house, conveniently close to his work in Kingswell Street, relatively cheap, being a hundred years old, but in a street that was seeing something of a revival. 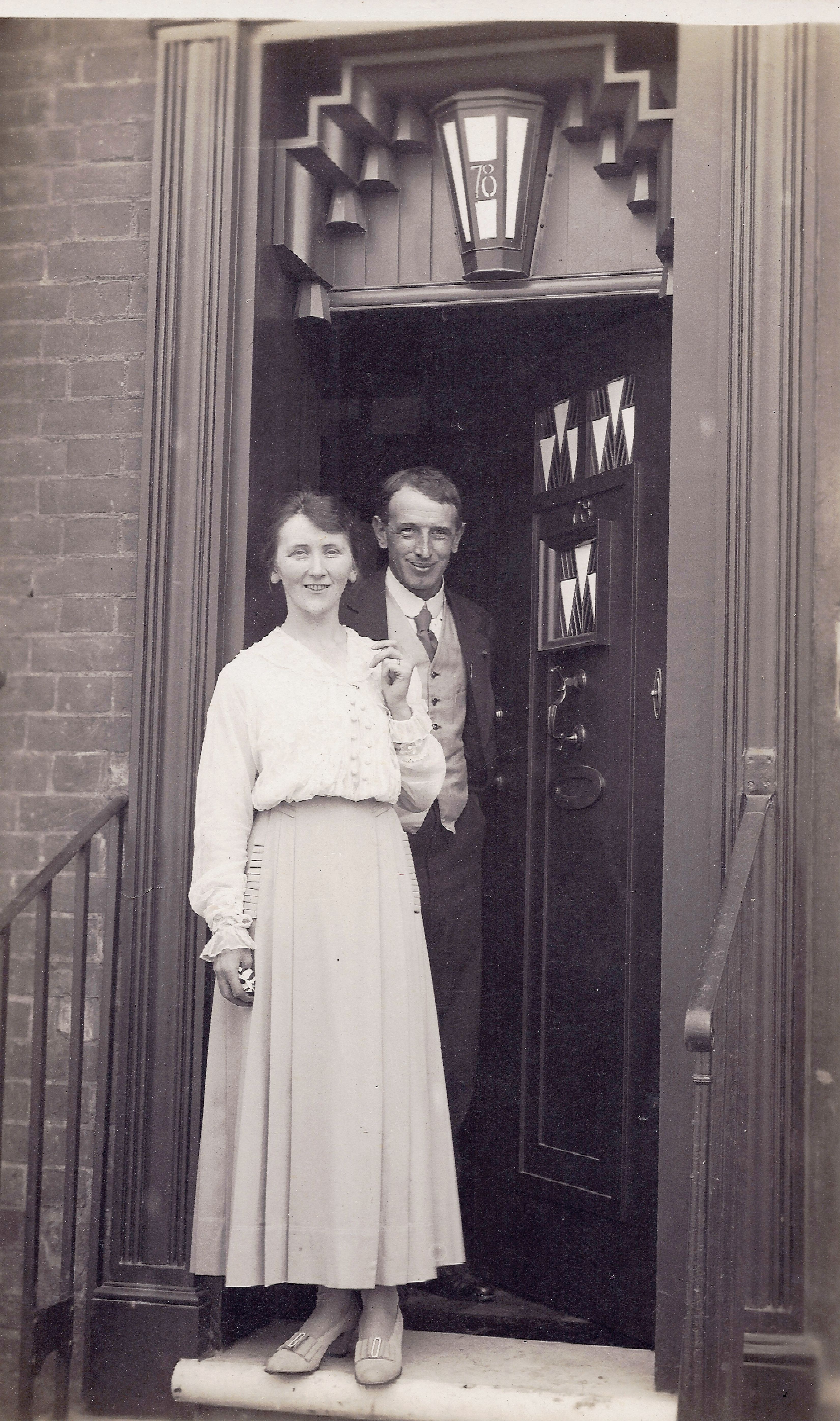 A number of neighbouring houses had recently been improved, including number 70, ‘Sarnia’, by his friend, the architect Keighley Cobb. Possibly in consultation with Cobb, Bassett-Lowke got plans drawn up by a Scottish architect long resident in Northampton, Alexander Ellis Anderson. These plans were submitted to the Planning Authority on 1 June 1916. They show a flat-roofed bay extension at the front, and a two story flat-roofed extension at the back. They also show the staircase moved around through 90 degrees.
Around this time Bassett-Lowke was introduced to Mackintosh – in a later note he says that he cannot remember who introduced them ‘a friend in connection with the Glasgow School of Art’ (quite possibly Francis Newbery, Headmaster of the School). By 31 July 1916, in the first surviving letter to Mackintosh, he is thanking him for ‘the drawings’, and saying that he has taken possession of the house that day (the deed was drawn up on 1 July).
Although Bassett-Lowke told Howarth in 1946 that the structural alterations were already taking place when he met Mackintosh, it is possible that Mackintosh took the basic idea as shown in the Anderson plans, and suggested carrying the bay up the entire elevation, creating the veranda and balcony to the bedrooms.
It is the stunning interior décor which is Mackintosh’s real contribution to 78 Derngate. The majority of the Mackintosh drawings relate to the decoration of the lounge-hall and the dining room. There are also drawings of the front door and of furniture, some actually made and some not. The originals are in the Mackintosh Collection at the Hunterian Art Gallery, University of Glasgow. 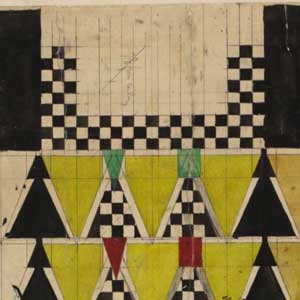 Featured below are a collection of plaques which will be launched at this weekend's special event.

The Moorcroft design Modernity is inspired by a bedroom at 78 Derngate.

To honour the legacy of Scottish architect Charles Rennie Mackintosh, Glasgow is holding a year-long celebration with events, talks and exhibits. Here are five must-see landmarks to help understand his impact.

Ask locals to pick their favourite building in the city and many will name this Spanish baroque structure in the West End. Though not designed by Mackintosh, it houses the world’s largest permanent display dedicated to his work, and 2018 welcomes a new Mackintosh exhibition showcasing designs that haven’t been seen in a generation.

In truth, Mackintosh's 150th anniversary year begins with a flourish courtesy of a major, new exhibition at Kelvingrove Art Gallery and Museum. Spanning the lifetime of Mackintosh, it presents his work in the context of Glasgow, his peers and contemporaries and how it contributed to creating the Glasgow Style.

Showcasing the very best of Mackintosh works held by the city, visitors will be able to view rare objects, many of which haven't been on display for more than 30 years. Around 250 objects will be on display, including stained glass, ceramics, mosaic, metalwork, furniture, stencilling, graphics, interiors and much more. Tickets are on sale now so don't miss this opportunity to see a once in a lifetime Mackintosh spectacular!

SEE THIS LINK FOR INFORMATION ON MACKINTOSH 150 glasgowlife.org.uk

Anyone with just the slightest interest in Moorcroft, will know that the work of Mackintosh has played a great role in the evolution of Moorcroft and, inevitably, has been a huge influence on Moorcroft designers. Mackintosh roses are a worldwide symbol of design excellence; his building designs have been a bedrock inspiration for modern architects. Emma’s evocative design, on this brand new Moorcroft shape, is a touching vision of the building lost to a devastating fire in May 2014. Emotive shades of blues and lilac are the only colours to grace the vase, in which delicately etched window panes meet iconic iron railings. With heads bowing in respect, Mackintosh’s willowy female forms wisp their way to the heavens, with heads crowned in dotted halos. 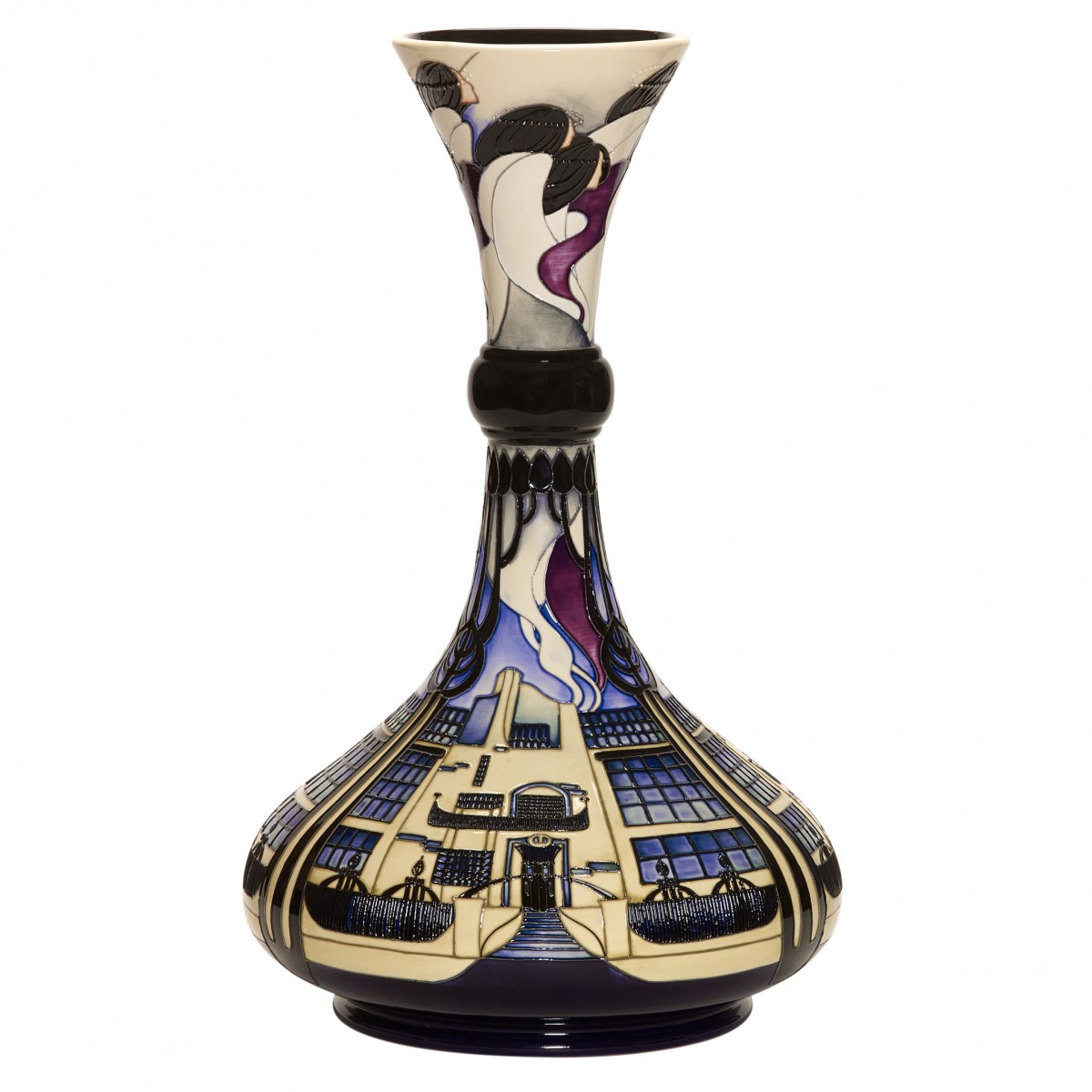 Built in two phases from 1897 to 1909, Mackintosh’s masterpiece was ravaged by a fire in May 2014, but is on its way to recovery. While the interiors remain closed, you can drop by the site’s Visitor Centre and Mackintosh Furniture Gallery. Spot flashes of Scottish baronial style, splashes of Japanese architectural detail and gain insight into Mackintosh’s genius. The above image is a Moorcroft vase entitled, The Glasgow School of Art by Emma Bossons FRSA available to order online.