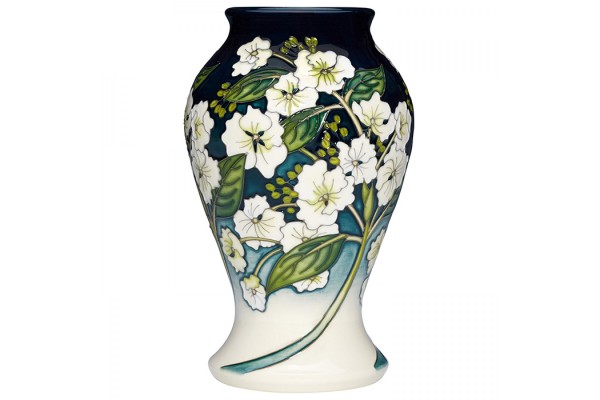 In partnership with The Royal Horticultural Society (RHS) we are delighted to announce that as the RHS Chelsea Flower Show (21st to 25th May) opened her gates this morning to receive her buzzing visitors, the Moorcroft stand will be showcasing a brand-new limited-edition vase aptly named, Chelsea’s Choice. The excitement around this inaugural art pottery design launch has been immense and has been well received within the press with features displayed in Gifts Today and other magazines and news feeds.

Celebrated Moorcroft designer Nicola Slaney is known in-house as the designer with the gift of translating botanical floral artwork, most recently within the RHS Beatrix Stanley Collection and through her access to this great horticulturalist’s botanical drawings of irises in the RHS Lindley Collections. The RHS Lindley Collections are held in the RHS Lindley Library which holds the finest collection of horticultural literature in the world and important collections of botanical art, archival papers, photographs and artefacts. Based in the beautiful Edwardian headquarters of the Royal Horticultural Society in Vincent Square, London, the library was founded soon after the RHS was established in 1804. It carries the name ‘Lindley’ because the library is largely based upon the book collection of English botanist and orchidologist John Lindley (1799-1865). The Society purchased this collection in 1866, a year after Lindley’s death. The library is part of the RHS Libraries service, which is made up of two Garden Libraries at RHS Wisley and RHS Harlow Carr gardens, as well as reading rooms at RHS Rosemoor and RHS Hyde Hall.

Chelsea’s Choice celebrates the extraordinary snow-white hydrangea that was awarded ‘Plant of the Year’ at the RHS Chelsea Flower Show in 2018. This hydrangea held masses of delicate lacecap white flowers and was tipped to become a firm garden favourite – it’s perfect for hanging baskets, patio containers or mixed borders. In truth, hydrangeas are known and loved for their colourful, plentiful display, but this winning plant produces dainty white flowers which appear from terminal and lateral buds from late spring into autumn. 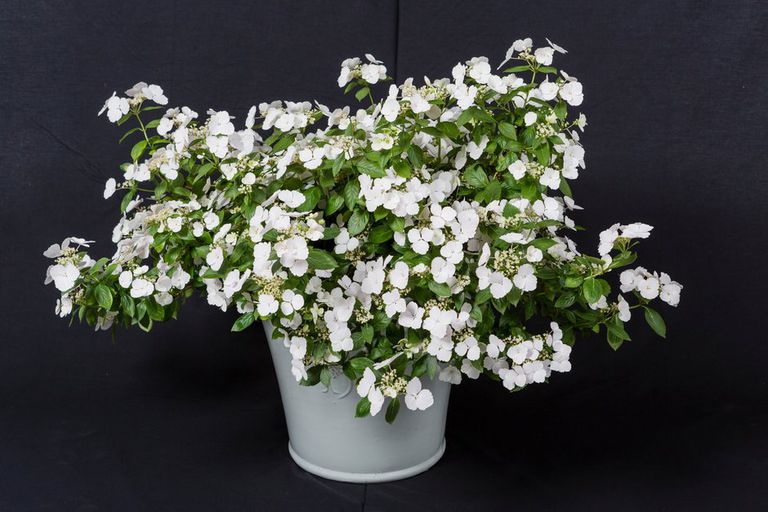 Pictured above, the hydrangea that won of Plant of the Year 2018 at the RHS Chelsea Flower Show and inspired Chelsea’s Choice.  Credit : RHS / Sarah Cuttle

The Moorcroft vase, seven inches high and three inches across at the base, which is available in a highly collectable limited edition of only 35 pieces, comes in a brand-new shape. The bulbous vase is inspired by the shape of a bulb itself, complete with wide shoulders and body to hold the intricate detail of the award-winning hydrangea.

With its graceful weeping foliage, the award-winning snow-white hydrangea that inspired Chelsea’s Choice is depicted with gentle curves and subtle tones. Nicola Slaney lifted the delicate lace cap white flowers and placed them onto an ink-coloured dark background for a dramatic contrast. The hydrangea has six times more flowers than the average hydrangea. Nicola has certainly left no stone unturned in trying to reflect its abundance – even creating, as mentioned above, an entirely new shape to hold it within her design.

Each of the 35 Chelsea’s Choice vases will include Nicola Slaney’s designer monogram and full signature along with all Moorcroft backstamps of authenticity and the RHS’s backstamp to show its official seal of approval.

Do go and chat with our Retail Director, Kim Thompson at the RHS Chelsea Flower Show today (Ticket Link) where the vase can be seen at the Moorcroft stand alongside other celebrated Moorcroft collaborations with the RHS, including the recent RHS Beatrix Stanley Collection, also designed by Nicola Slaney. The vase will also appear on the Moorcroft website today and can be viewed by members of the Moorcroft Club this weekend at the Moorcroft Heritage Visitor Centre in Stoke-on-Trent. 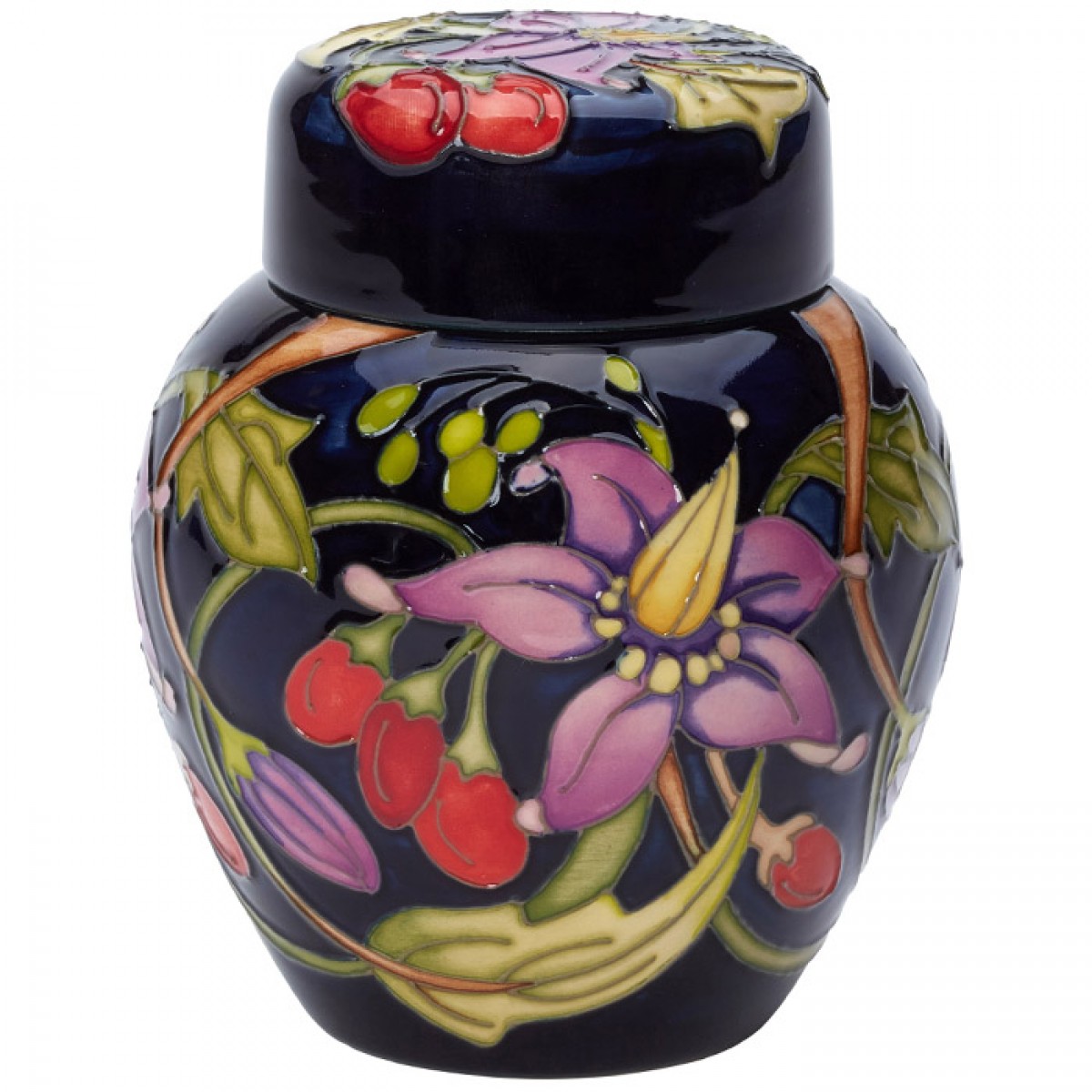 Moorcroft and the RHS have collaborated a number of times in recent years, notably through Moorcroft show gardens. The RHS Rose Bouquet Collection – six designs, based on famous roses - appeared on vases, coasters and plaques with some of them adapted from illustrations from the likes of Mary Lawrence’s (1794 -1830) Selection of Roses From Nature, which was one of the first books solely dedicated to roses. One single copy of this book can reach £120,000 on the secondary market. In short, the Moorcroft RHS collaborations always have pedigree and are a wise as well as a beautiful edition to any home.

Cathy Snow, RHS Licensing Manager, has stated: “With its inaugural use of a brand-new vase shape and the inspiration gained from an RHS award-winning plant, this is a vase design that sets the bar high – and effortlessly meets it. This memorable design from a valued RHS partner will no doubt be a major talking point among all lovers of both art pottery – and beautiful plants – at the RHS Chelsea Flower Show.”