Design of the Week – The Pollinators

Design of the Week – The Pollinators from Senior Designer, Rachel Bishop BA (Hons)

Why this design is key to Moorcroft’s Senior Designer’s vision to highlight the plight of the bumblebee?

National Honeybee Day was celebrated this year on the 17th August and by way of our own tribute to the humble bee, Moorcroft’s Design of the Week (commencing 22nd August) will be The Pollinators with each of the three pieces available seductively priced with a 30% discount on them when you quote Poll30. Bees have appeared in a number of Moorcroft designs over the years with Phillip Richardson’s Honeycomb design (c. 1987) holding shapes with honeycomb dripping from the ridge of each piece of art in tapering form as bees congregate and depart against a tonal blue ground. Not only do bees tickle our taste buds with their harvest, and hold a charming form as they bumble about in the garden, but they are vital to life itself – they are key pollinators. Bumblebees help to pollinate many of our arable and horticultural crops, including currents, strawberries, tomatoes and broad, field and runner beans. Without them, there would simply be little or no crop to harvest. In truth, there are some regions where hedgerows have been decimated to make way for larger agricultural fields and queen bumblebees are struggling to find places to nest. Unsurprisingly, crop yields are falling. 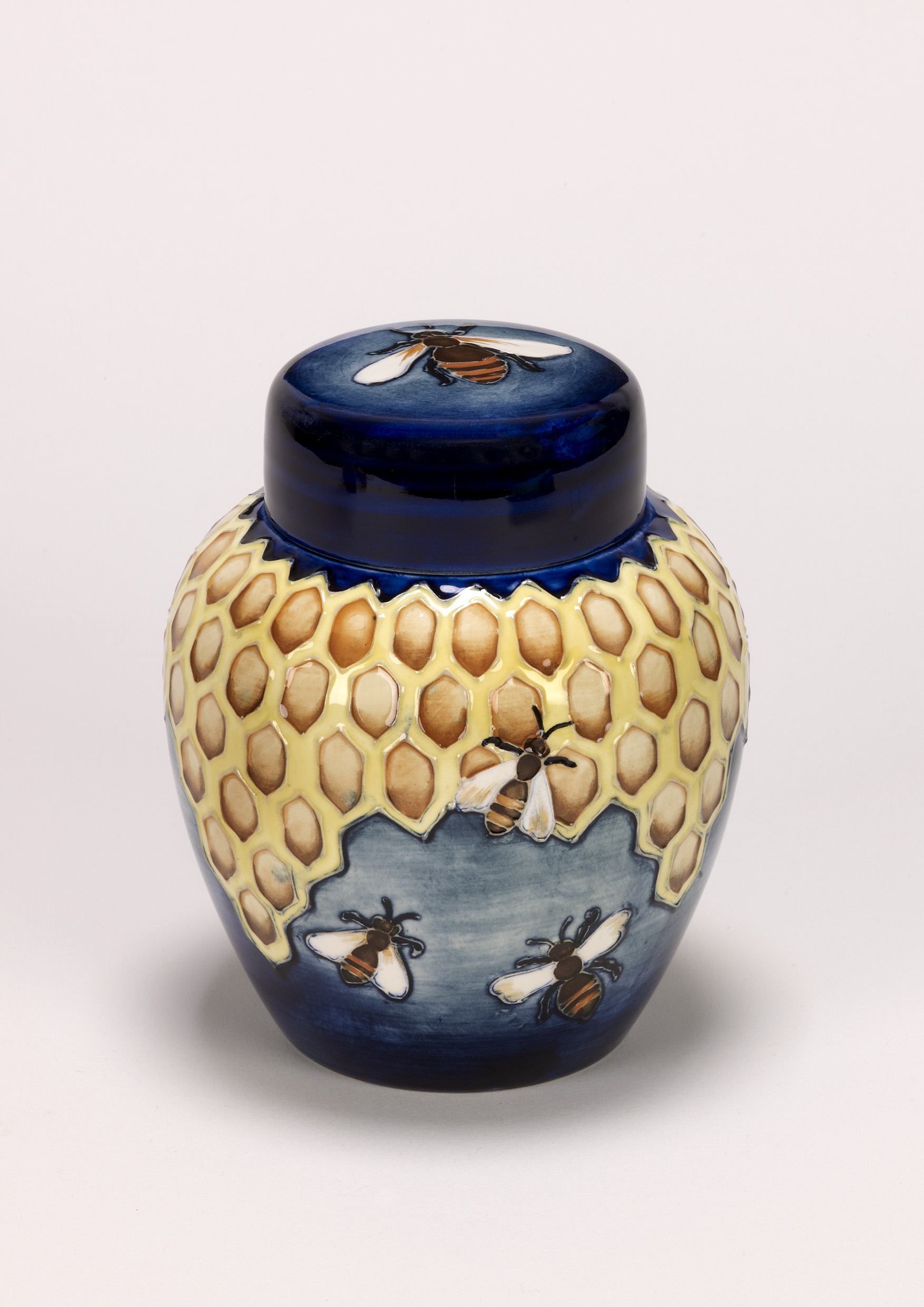 According to the Bumblebee Conservation Trust there are currently 24 species of bumblebee resident in Britain. Another, the Short-haired Bumblebee (Bombus subterraneus), is currently being reintroduced after going extinct in 1988. Britain also has two extinct bumblebee species: Cullum’s bumblebee (Bombus cullumanus) last recorded on the Berkshire Downs in 1941, and the Apple Bumblebee (Bombus pomorum), a short-lived establishment on the south coast in the mid-1800s. The story of bumblebees over the past century has been one of decline.

World agriculture was discussed at a convention in Geneva last week and scientists from over 50 countries around the world considered the effect of agriculture on the environment. In terms of the decline of the bumblebee, it is believed that this has occurred mainly because of large-scale changes to the way the countryside is managed. First the mechanisation of agriculture, then later the public demand for cheap food, the need for ever-greater quantities of food and crops, and the increasing reluctance to buy vegetables and fruit that do not fit the standard forms of shape, colour and size have conspired to hugely reduce the nationwide density of the flowering plants that bumblebees feed on, as well as the sheltered corners that they nest and overwinter in.

As bumblebees only feed on flowers, they need far more plants than equivalent species which are able to also eat leaves or roots. Rachel’s mother was a horticulturalist and the Moorcroft senior designer’s own love of flowers is clearly evident in the fast array of floral designs that she has created over the last 20 years and in so doing she is said to have carried the Moorcroft mantle from the founder William Moorcroft, whose father was a botanical artist, and his son Walter. Fundamentally, bee have a colony-based lifestyle, and need to have enough flowers available to sustain 40-400 sterile worker bees for the lifespan of the colony (potentially several months March-October) in order to produce the new reproductive individuals – males and queens – at the end of the colony lifecycle. Rachel’s desire was to encourage people to plant more flowers in the garden to assist the plight of the bumblebee. In her Plight of the Bumblebee collection there is one design that stands apart from the others in Rachel’s vision – the Pollinators, dramatically portrayed on this design of the week, the 365/12, numbered edition vase which see bumblebees ascend up the elongated stem of the vase and take their flight home.

‘My “Pollinators” collection focuses on a variety of flowers that attract bees. We can all perhaps plant a little more sympathetically and encourage bees, as well as having beautiful, colourful gardens. The honey bee thrives on holly during the winter, as seen on the ginger jar lid. So, my aim was to show that bees are not just for summer but that they are present all year round and need flowers from all seasons.’ -Rachel Bishop

Poppy, rosebay willowherb, clover and bramble are the colourful garden favourites that Rachel chose to adorn The Pollinators Collection, which looks at bees in different seasons.